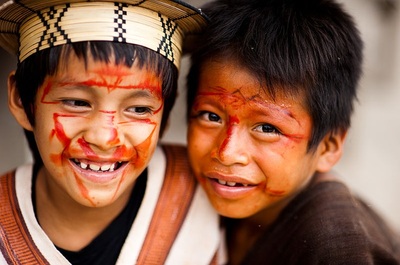 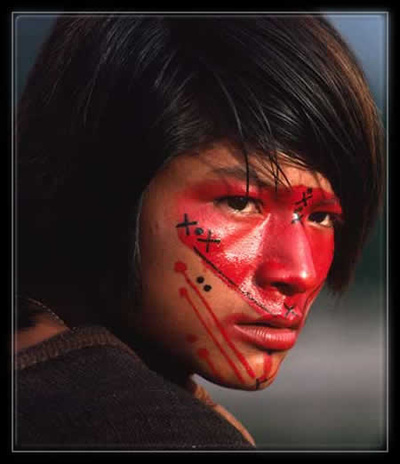 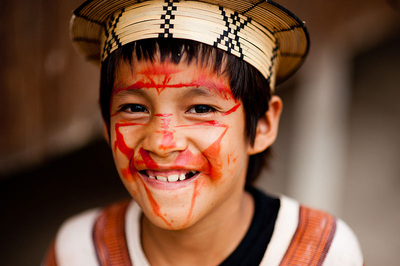 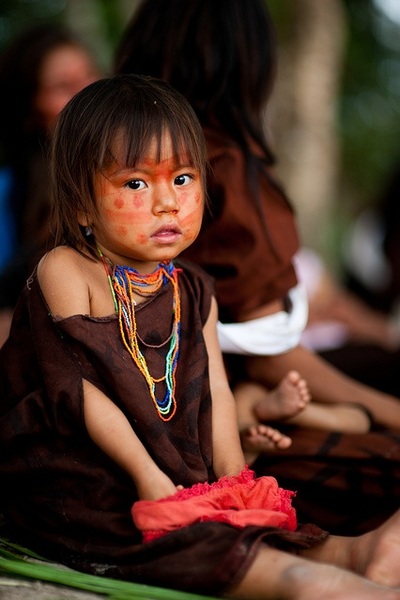 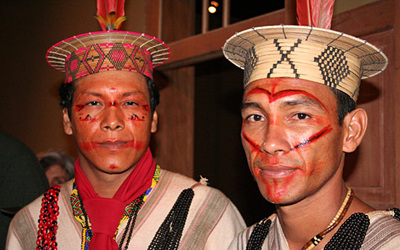 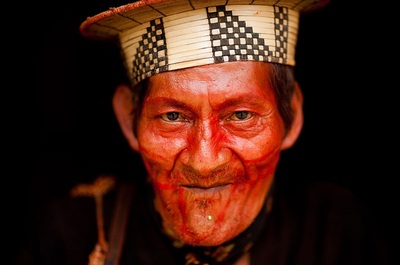 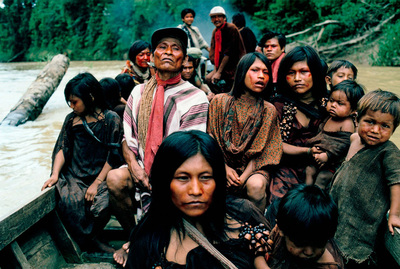 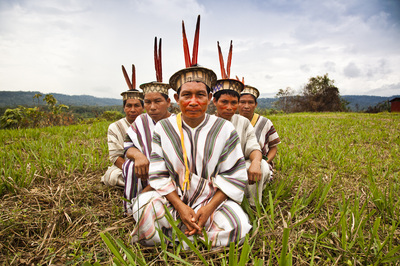 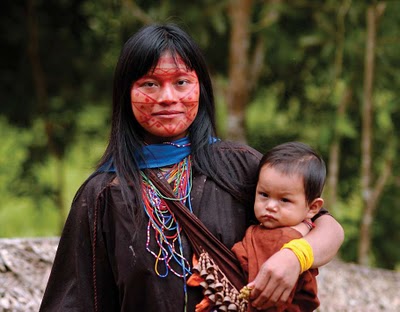 The Asháninka or Asháninca (also known by the exonym "Campa" or "Kampa", which is considered derogatory) are an indigenous people living in the rainforests of Peru and in the State of Acre Brazil.
Their ancestral lands are in the forests of Junín, Pasco, Huánuco and part of Ucayali.

The Asháninka (their name means: our kinsmen) are estimated between 25,000 and 45,000. Only a few hundred of these live on the Brazilian side of the border. That means that among the 300,000 native people from 65 different ethnic groups in the Peruvian Amazon, the Asháninka are the second largest indigenous group. The Ashaninka communities are scattered throughout the central rainforests of Peru in the Provinces of Junin, Pasco, Huanuco, and a part of Ucayali, and the state of Acre in Brazil. After Brazil and New Guinea, Peru is believed to have the highest number of uncontacted tribes in the world.

Asháninka is a language from the Arawakan family. Sometimes referred to as Campa, although this characterization is considered by the Asháninka to be offensive, as it derives from the Quechua word thampa, meaning ragged and dirty. The people who speak this language call the deep rainforests in Peru their home.
Like all languages that have a predominance in any particular region of Perú, Asháninka is an official language in the area in which it is spoken, as provided by the Constitution. Literacy rates range from 10% to 30%, compared to 15% to 25% literacy for the second language, Spanish.

The Asháninka are mostly dependent on subsistence agriculture. They use the slash-and-burn method to clear lands and to plant yucca roots, sweet potato, corn, bananas, rice, coffee, cacao and sugar cane in biodiversity-friendly techniques. They live from hunting and fishing, primarily using bows and arrows or spears, as well as from collecting fruit and vegetables in the jungle.

The Asháninka were known by the Incas as Anti or Campa. The Antis, who gave their name to the Inca province of Antisuyu, were notorious for their fierce independence, and their warlike skills in successfully protecting their land and culture against intrusion from outsiders.

Ashanínka tribal societies have faced overwhelming obstacles in disputes over territory and culture against the immigrating Spanish culture and neighboring tribal societies culture. Among 12,000 – 17,000 BP the first official tribal settlers, hunters, and foragers following the post-glacial climate change settled into the Peruvian section of the Tropical Andes. The Tropical Andes is one of the three major Biodiversity Hotspots in the entire Peruvian Amazon. “Until about 10,000 years ago everyone in South America apparently lived by hunting, fishing, and collecting wild foods in a continent-wide tribal world.” Biodiversity is the establishment of the Ashanínka way of life, so they treat this biodiversity hotspot as their ‘natural capital.’ In AD 1542 the European invasion began breaking apart native Amazonian cultures like the Ashanínka, and the Matsigenka tribal societies. The invasion of the Europeans caused a mass destruction of numerous tribal societies cultures since they did not have natural immunity to the foreign illnesses brought along with the Europeans. The European settlers pushed to overtake the natural territories of the Ashanínka due to the “vast aquatic river system as well as large areas of savanna or scrublands.” This invasion of foreigners caused chaos for a short amount of time, in comparison to the entire history of hunter-gatherers. Repeated encroachments on their lands have long threatened the survival of the Ashanínka as a people. Yet theirs is a history of resistance, and despite their suffering, this recent victory demonstrates that they are still opposing the many external forces that threaten them.

In more relevance to today’s time in 1752 Ashanínka, their former indigenous inhabitants had reclaimed Amuesha and Piro territories. The Gran Pajonal region now remained beyond the reach of colonial and republican state presence until the 1868 establishment of the city of La Merced, which marked the eventual incorporation of the region into the national and global economies. In the most relevant time frame of historical events for the Ashanínka, between the 1980s and 2000s, the Ashanínka home is in the Peruvian section of the Tropical Andes are now swathed by newly created national parks, protected areas, and communal reserve juxtaposing to a biodiversity hotspot or their "natural capital". "In 2003, the Ashanínka of the Ene River valley in Peru were granted Communal Reserve rights to a portion of their ancestral lands, in the form of Otishi National Park. In June 2010, however, the Brazilian and Peruvian governments signed an energy agreement that allows Brazilian companies to build a series of large dams in the Brazilian, Peruvian, and Bolivian Amazon." (Bartholomew) The problem with the 2,000-megawatt Pakitzapango Dam is that it has a permanent location that is proposed to be located in the heart of Peru's Ene valley could displace as many as 10,000 Ashanínka. These encroaching problems have not only extremely changed the generational culture of the Ashanínka tribal societies, but has also changed landscape of what we call modern-day Peru.

The Asháninka traditional dress, commonly known as a kushma (a word from Quechua), is a robe made from cotton that is collected, spun, dyed and woven by women on looms. Typically the robes are dyed either brown or a bright royal blue. The shoulders of the garments are ornamented with seeds. A full length robe can take up to three months to complete.

Traditionally, women wear their hair long, and over the shoulder, While typically men wear their hair short or in "bowl" cuts below the ear. Around their necks they wear a large variety of necklaces and bracelets made with seeds, the teeth of tapir, peccary and monkeys, and brightly colored feathers. Traditionally the Asháninka men, women and children paint their faces in a variety of designs using the bright red crushed seeds of Achiote (Bixa orellana) (annatto) fruits. For ceremonial purposes, the men also wear woven circles of palm leaves decorated with feathers on their heads, and the women wear a woven cotton head dress.

It is increasingly common to see Asháninka—men more than women—wearing castoff western clothes, particularly in areas where western Christian missionaries have been able to exert influence.

The Asháninka are known historically to be fiercely independent, and were noted for their "bravery and independence" by the Spanish conquistadors. During the rubber boom (1839–1913), the Asháninka were enslaved by rubber tappers and an estimated 80% of the Asháninka population was killed.

For over a century, there has been encroachment onto Asháninka land from rubber tappers, loggers, Maoist guerrillas, drug traffickers, colonisers, and oil companies. For much of their history, they resisted acculturation and outside influence. Since the 1950s, Asháninka territories have been reduced and their settlements have been systematically destroyed, resulting in a retreat by Asháninka people into the jungle. Some Asháninka fled to Brazil, and now a small community of 600 or so have land rights in the state of Acre.

During the 1980s and 1990s, internal conflict in Peru caused massive displacement, disappearance, and death among the Asháninka communities located in the Ene, Tambo and Perene valleys in the Vilcabamba Mountain range. In this period Ashaninka chacres (garden plots) were burned, Asháninka legal papers were destroyed, some Asháninka were forced on pain of death to join the Shining Path, and others were enslaved. Many fled into the interior and others gathered in the thousands in small areas for protection. Because Asháninka communities are usually very small, this caused great disturbance. They could neither hunt nor fish effectively due to the danger posed by armed groups in the forest, thus malnutrition became increasingly threatening. According to the Truth and Reconciliation Commission, 10,000 Asháninka were displaced, 6,000 Asháninka died, and 5,000 Asháninka were taken captive by the Shining Path during this time, and thirty to forty Asháninka communities disappeared.

Malaria is on the rise in Asháninka communities due to logging and the illegal clearing of tracts of lands by loggers and colonists, as are other diseases brought in by "outsiders".

In the mid-2000s, the Asháninka gained legal title to a portion of their lands which they had mapped using GPS technology; these lands are now a National Park and a Reserved Zone, Otishi National Park. To date most Asháninka have returned to their ancestral lands, some from as far afield as the Urubamba river. The Asháninka are involved in new capacity building projects and projects that seek to support the Asháninka in their quest to record, maintain and strengthen their culture for future generations and address the problems and threats from the "outside".

Current threats (either directly or indirectly) are from oil companies, drug traffickers, colonists, illegal lumberers, illegal roads, conservation groups, missionary groups, and diseases brought by outsiders. Roads are being built into the forest to extract mahogany and cedar trees for export to markets in the United States and Europe despite an international embargo.

Religious missionary groups are intent on changing Asháninka culture and belief systems, and some other groups who are exploiting problems within the communities became worse as a direct result of the violent upheavals of the communities over a decade ago. Some Conservation programs in the area have also been less than fair to the Asháninka in their move to create Conservation zones in this "important ecologically diverse area", choosing plants and animals over the Indigenous rights, and it remains to be seen if this will pose a threat to their lives and land in the future.

Other Asháninka have moved further into the interior, choosing voluntary isolation rather than have any more contact with the world beyond their lands.